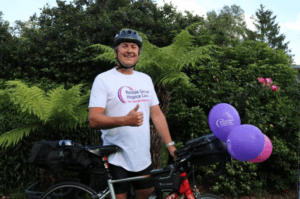 When the government announced lockdown many people dusted off their bikes and started pedalling to the local park for their daily exercise. For St. Albans resident Bevan Clark, his desire to take up cycling again after 30 years kickstarted a fund-raising idea of a lifetime. Bevan, aged 45, is going to ride the famous Land’s End to John O’Groats 1500km trail to raise £50,000 for the Herts & Bucks based Rennie Grove hospice nurses.

Last August Bevan lost his best friend Steve Russell to cancer, and he experienced firsthand how the Rennie Grove nurses played a vital role to support Steve, aged 48, and his family during his end of life care. Husband and father-of-two Bevan wanted to do something to pay back the kindness provided; and support the charity-funded important work of the nurses.

“I just knew I needed to do something to help the charity. I thought if I were going to do anything, I would do something massive” said New Zealand born Bevan. Not only is he riding in Steve’s memory, but Bevan is doing it on Steve’s bike.

“It’s great that Bevan is able to take Steve (or at least a big part of Steve’s hobby as a keen triathlete) with him on his challenge.” Said Steve’s wife Jane. “Steve would have been very proud”.

Bevan is starting out from Land’s End on the 28th August 2020, the first anniversary of Steve’s passing, and is hoping to complete the journey in ten days. As it would have been Steve’s 50th birthday this year Bevan has set a target of £50,000. Please donate anything you can HERE