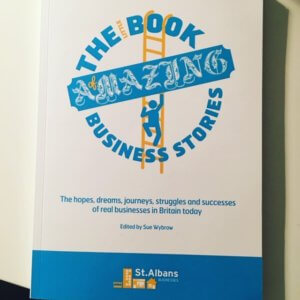 Taken from “The Little Book of Amazing Business Stories” available at £11.95 via the TBC shop 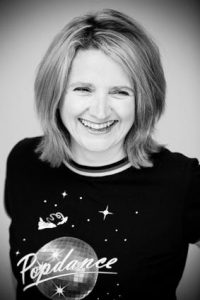 I never wanted a career, or to run my own business. I simply wanted to earn money, go home and live my life.

I didn’t have big ambitions, but I knew I always wanted my independence. And my mum even says to me now how independent I was as a kid and that I never wanted to miss out on anything – always had ants in my pants.

So I started a paper round at the age of 13, which I then added to by working in a bakers shop every Saturday, and then at one point I had three jobs, which included working in a bank when I was 16.

I wasn’t a real fan of school, I loved writing but didn’t love school life – I wanted to make money and be able to do what I wanted to do.

So, even before I finished school, I applied for jobs in a bank – a good solid foundation for a career, said my parents, and my sister was working for Barclays at the time, so I applied for a few jobs and got offered Bank of England, Lloyds and Midland. Bank of England were far too stuffy for me at the time and Midland were paying £3 more a year! So I went for them! Based in the area office in Baker Street, London, I thought I’d hit the big time.. and I had! Working with other 16 year olds, as well as the more experienced staff, I enjoyed my 2.5 years with the bank. It paid well, it taught me great customer service and I made some amazing life long friends.

But it was soon time to take a look around and see what I wanted to do next – I had no ambitions to be a bank manager, or to go into any other areas of the bank, so I decided to look around for the next thing for me.

I completely changed career and ended up in Market Research for a trendy agency near Holborn. Within my first week we were all taken to France for the day on a jolly, with fruits de mer and wine a plenty – it was certainly an eye opener and I revelled in the buzz and franticity of the advertising world. We worked with the likes of Saatchi & Saatchi, BMP and GGT and hosted the annual yacht race around Cowes and the Isle of Wight – it was a scene I’d never been part of but felt welcomed within and I loved it – seeing the passion and heights of achievement within the companies was contagious and whereas before I had thought of myself as not important enough to eat at some the trendy restaurants in London, I actually realised that I did have a brain and something important to give too.

At one meeting with my boss, some suited and booted people at Saatchi & Saatchi, on what was the skype equivalent in those days (what they called a pizza) that connected London with the US, when everyone was using complicated words and trying to puff up what was being said – I sat there, as a 20 year old, thinking “is this what they are trying to say” and thinking would I look a fool if I said it? But then said “is this what you are trying to say” and they would say “yes, that’s exactly it” and I would wonder why there was all the “fluff” and complications of the communication.

So from joining as a receptionist, I resigned as a Field Manager – I’d climbed a steep ladder in an amazing company that were a fantastic support for my ideas and suggestions. But, having just bought my first house, it was risky times at work and my salary cheque bounced, so, again, I had to look at where I wanted to progress from there. It was time to move on. And my boyfriend at the time had been in unsteady work, so it was my salary that was relied upon – so I looked around and was offered a job working for Warner Bros. in International Television. I was elated. This was going to be the best job ever!

It ended up being the most boring job for me ever! My boss was away a lot, we didn’t have the internet, so I ended up offering my services to the marketing department and working with the head of marketing for shows such as Friends, ER and Superman. I did feel very foolish when I asked the Marketing Manager if those were “her friends” about a framed photos of the famous 6! Well Friends was not that famous then!

After 9 months, and when my boyfriend at the time got a longer contract (he worked in TV), the mortgage was not on my head for a few months, so again, it was time to go – I didn’t know what I wanted to do so decided to temp for a while. A week at Estée Lauder was very interesting but what I loved about temping was being in control of my own destiny. If I didn’t want to work that week, or for that particular company, I could decline.

After around 3 weeks of loving temping, I was offered a job at a marketing agency in North London. It was near my home and with people I knew, so I was a bit fearful of feeling “retired” – I’d always worked in London – but I decided to go for it and see what happened.

I ended up meeting my gorgeous husband there and spending 13 years in marketing – working my up to Marketing Director and working with amazing brands such as Veolia Water, Citilink, BBC and various energy companies.

It was when I had my children that everything changed – as it does for many women and parents. Like I say, I’d never wanted a career, I simply wanted to earn enough money to be independent and pay my own way in life – to have a roof over my head and to be able to afford lots of G&Ts 😉

But it all changed when I had my two gorgeous sons. With our first, Ernie, I had to go back to work. We’d just bought a house in St Albans and we couldn’t afford for me to give up. I went back to work 4 days a week and remember crying in the kitchen as my 3 month old was in nursery or with grandparents – I wanted it to be me there for him.

When our second, Frankie, was born, more demand was put on me and at one point in our lives, we had a childminder picking them up from school as I was doing long hours.

It was my mum that said to me “you won’t ever get this time back with the kids” that it really hit home.

I’d started a dance class with fabulous dance teachers leading them  – dance routines to pop music, for women aged 18+ – learning dance routines from the 80s, 90s and 00s – I wanted to get active and shed a bit of baby weight and just have an hour of “me” time away from work and the demands of the kids.

I was getting more emails about Popdance than I was for my marketing job and I thought that this wasn’t fair on my employer. So, decided to go for it. We couldn’t afford it and we cut out household income massively – but it was my hubby who said I should go for it and that this could be something amazing!

It was a massive decision, and one that financially on paper we would not have taken, but it’s given me an amazing life – being able to be there for the kids, and for our parents – to go sledging with the kids when it snows and catch up with work in the evening – to head to the pool when it’s sunny and work there – to be able to work from anywhere in the world and be with the ones I love is incredible!

But it didn’t just stop there!

From one dance class in St Albans, we were approached to run family Popdance classes in a Holiday Park, and then other dance teachers wanted to run Popdance, and then toddler classes were in demand, followed by birthday parties, hen parties, workshops with brownies an dguides, after school clubs – it just escalated.

Now Popdance is international – and we work with amazing dance teachers across the globe – helping them to run successful and profitable Popdance classes, parties and workshops.

I still love going to Popdance – even though I’m not a dance teacher – I think that’s what makes it work – enjoying being a customer of my own business – having the marketing and business skills to help others make a fantastic living out of Popdance – and working with our teachers as a team – we are all amazing at something, but we are all not amazing at everything – sharing our skills and support is what makes it work.

And that’s how St Albans Businesses, now The Businesses Community came about – having never run a business before, it was a massive learning curve. Feeling alone, nervous, could I do it?

Meeting other amazing people running, starting, heading up their businesses, made a massive difference to me – support, help and collaboration were the instigation of TBC and it’s the driving force behind what makes Popdance the fantastic, ambitious, driven and passionate business that it is. 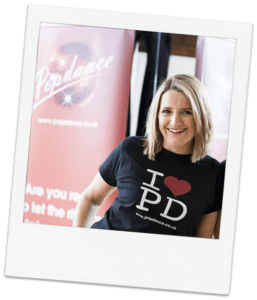 Get your copy of “The Little Book of Amazing Business Stories” and read about incredible hopes, dreams, journeys, struggles and successes of real businesses in St Albans – available now via the TBC Shop